Name of This Town Rings A Bell

Just because Ding Dong is in Bell County doesn’t mean those two facts have anything to do with each other. If you think it does you’re either half-right or half-wrong, depending on your disposition.

Ding Dong was named for a Bell all right, but not Peter Hansborough Bell, the third governor of Texas and the man for whom Bell County is named. Nor is it named for the “Ding Dong Daddy of Dumas” or the junk food of the same name. The Wicked Witch did not die there. Ask not for whom the bell ding dongs . . .

According to historical accounts, the Bells in question were Zulis Bell and his nephew Bert Bell. In the early 1930s the two Bells bought and ran a country store on the Lampasas River about midway between Killeen and Florence, at a place then known as McBryde Crossing.

The Bells hired a talented sign painter by the name of C.C. Hoover to paint the sign for their new store. But Hoover was no mere sign painter. He had done some fine oil paintings and could draw as well as letter. Fred Foster at Stokes-Blair Hardware Company in Florence knew of Hoover’s talent so when the young man showed up at Foster’s store to buy paint for the job, Foster advised him to put his creative talents to use.

“Why don’t you do something original with this sign,” he suggested to Hoover. “How about drawing two Bells with the name Zulis in one and Bert in the other. Then print ‘Ding Dong’ on the sign.” In this manner manner, the deed was done. The little community around the store took on the name of Ding Dong, and there you have it.

Just because Ding Dong has made a name for itself by, well, the way it named itself doesn’t mean it’s easy to find. You don’t even have to blink to miss it. You can be looking for it and still miss it. A couple of dozen people have a Ding Dong address. The 777 Estates lists a Ding Dong address, but that subdivision is on the outskirts of Ding Dong, not Ding Dong proper. If you pass the turn to Maxdale — FM 2670 — you have gone too far.

Ding Dong first came to the attention of wider America via the syndicated feature “Ripley’s Believe It Or Not,” which gave the town its 15 minutes of fame. Travel writer Bill Bryson mentioned the town in his book, Made In America. Another book, Passing Gas: And Other Towns Along The American Highway by photographer Gary Gladstone, pays tribute to Ding Dong with a photograph of carpet salesman and fire chief Harold Rowe posed in front of his fire truck in Ding Dong.

Jim Bowmer of Temple, who wrote the book The Unknown Bell County about local folklore and legends, remembers that Hugh Farr, a fiddler for the Sons of the Pioneers, told the audience of a Johnny Carson Tonight Show that he was raised in Llano, Texas but born in Ding Dong, in Bell County. Noted conductor Walter Winchell, when asked whom he believed to be the greatest natural violinist of the 20th Century, named Fritz Kreisler for his left hand and “the right hand of that gentleman who plays violin with the Sons of the Pioneers, I don’t recall his name.”

That would be Hugh Farr, from Ding Dong, Texas.

Late Dallas newspaper columnist Frank X. Tolbert stumbled across Ding Dong in his wanderings around the state and thought it was a shame the town did not have its own bell. What was a Ding Dong without a bell? With Tolbert’s urging, the town received a bell from the Santa Fe Railroad in 1962. It weighed 250 pounds and was given to the unofficial mayor of Ding Dong, Charlie Hold, by two Santa Fe vice presidents. Hold took over the store from the Bells in 1950. Hold told Tolbert, “That big red-mouthed bell you got our town has been kindly of a mixed blessing. A lot of smart jacks stop off here and rings that bell at all hours of the day and night. Gets mighty bothersome.”

Ding Dong’s last moment in the spotlight came in 1964, when members of the Killeen Lions Club International tried, as a joke, to secure Ding Dong as the site of the district convention. Mayor Hold was said to be none too happy about it.

As Gladstone’s book makes clear, Tennessee takes the prize for State With the Weirdest Names. Texas is a close second, but it’s hard to compete with Sweetlips, Gizzard’s Cove, Suck Egg, Bucksnort, Dull, Only, Peeled, Chestnut, Nutbush, Defeated and Nameless.

They don’t name ’em like that anymore, which may be a good thing. But in becoming too sophisticated to call our homeland Ding Dong or Suck Egg, we find our refinement may have come at the expense of a peculiarly American sense of humor.

From “Letters from Central Texas” Column 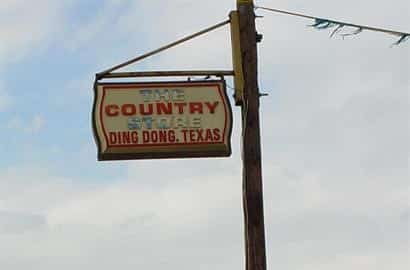